An App 195 Million Years in the Making 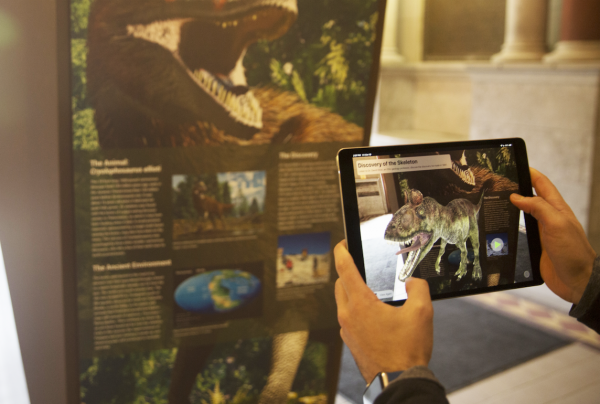 When you enter Orton hall these days you’re bound to immediately look up. The newly installed 24-foot-long cast of a Cryolophosaurus skeleton towers over guests and draws gasps of delight and awe as visitors take it in.

While the dinosaur was last living more than 195 million years ago, it has a high-tech twist in its new home: an augmented reality (AR) app that lets visitors see the fossil in new ways.

A New Addition to Orton

The Orton Hall AR Experience, created through a partnership between Arts and Sciences Technology (ASC Tech), Digital Flagship and the Orton Geological Museum, was envisioned as a way to help students and visitors alike engage more deeply with the installation.

“The dinosaur is simply amazing,” said Bill Ausich, director of the Orton Hall Museum. “It makes a special building even more special. But the main purpose of this dinosaur is to increase the STEM outreach activities of the Orton Geological Museum.”

When app users point their phone’s camera at the informational panel on the exhibit, a rendering of the dinosaur seems to pop from the screen and lets viewers see what it may have looked like during its lifetime. The app also shows informational videos atop photos that exist on the physical panel, allowing users to learn about the dinosaur directly from emeritus faculty member Dr. David Elliot, who discovered the fossil.

Creating an app is a collaborative process that can often take months or years to finalize. In the case of the Orton AR Experience, the team had just three weeks leading up to the exhibit’s opening day.

Student Daniel Matar, a passionate coder with more than a few apps under his belt, worked with Kelsey McShane, a student with 3D modeling and AR experience, to bring the ideas and goals of the Orton team to life.

“We worked with everyone on the team; the museum director, curator and discoverer to get the content for the app,” said Matar. “They really were fantastic.”

To take the app from idea to reality required discipline and an understanding of what was possible within the timeframe.

“Timing was the most difficult part,” said Matar. “It was a sprint the whole way. There are so many possibilities to implement, but with only three weeks, we really had to be patient and say ‘no' to most of it.”

One of the features the team prioritized was the interactive 3D model of the Cryolophosaurus. McShane was tasked with helping to bring the dinosaur to life. When the model of the dinosaur ordered for the digital recreation arrived, the arms were positioned in a way that would be impossible for the dinosaur in real life. McShane took the time to disassemble the model and turn both arms ninety degrees so the digital model would be consistent with the anatomy of the real dinosaur.

“With any app there is a lot of trial and error, but we really wanted to be sure things were accurate,” said McShane. “I’m really pleased with what we were able to create”

Next Steps and New Features

The app the team was able to create in three weeks is impressive, but they’re not done yet. With the open house complete, Matar, McShane and the Orton team will revisit the app and look for ways to improve it.

“Now that we aren’t racing against time, we can really get creative,” said Matar. “I would love to see the addition of animated models and things children would play with to enhance understanding. We could even surround a user with the dinosaur’s environment.”

Projects like this one will only continue to grow in number across the university as more avenues for students to develop and hone their coding abilities become available. Digital Flagship is bringing a mobile app design lab to campus in the spring and Swift coding curriculum in autumn 2019.

“Programming is the most versatile technical skill you can have,” said Matar. “Find a platform you love, whether it’s iPhone, Android, Raspberry Pi, whatever. Then just try making a small project on it and continue building up from there. It’s all about getting better, one project at a time.”

Be sure to download the Orton Hall AR Experience– available for iOS devices, learn more about the coding resources offered by Digital Flagship and sign up to hear about coding opportunities coming to campus.